You read it right!  While some companies in NE Ohio were busy following in the footsteps OMG left after introducing the first gaming theater to the Akron/Canton/Cleveland market, we surprised everyone with a second video game truck last fall.  Less than a year later, we’re introducing our most advanced gaming vehicle yet!  The OMG PARTY TRUCK made its debut on 9/8/13 and is the only one of its kind in the nation!

At only 20′ long, the shortest trailer in our mobile video gaming fleet is  so much more than just a video game truck!  It’s an interactive, diverse, media-driven party on wheels with tons of features, gadgets and options.  Inside you’ll find (3) 55″ TV’s with X-box 360’s (and Xbox One’s in November when they’re released), a traditional photo-booth and a 1,000 watt sound system.  There’s even a video-capture kiosk with 30″ screen which allows participants to capture video from a live feed of the interactive outdoor area. Powering the sound system is a touch screen media-jukebox kiosk sporting 6,000 current songs (edited for content)as well as over 100 internet Radio Stations.  Guests can also review the pictures and videos from the day right on this screen.  It’s a truly immersive and interactive experience! 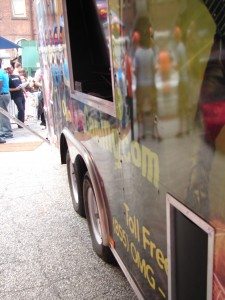 Off the back of the trailer is an  elevated stage with 70″ LED screen and 2,000 watt sound system!. The stage is perfect for interactive games like Just Dance and Karaoke. The OMG PARTY TRUCK also sports two more touch-screen strations and a 5th gaming station on the side of the vehicle.  One of these screens shows a video feed of the inside of the trailer while the other is our social media kiosk.  From this kiosk, guests can view all of the videos and pictures taken throughout the party and immediately Tweet them or share them on Facebook.  They can also use this outside station as another touch screen jukebox.  The options are endless.

The new truck will be servicing most of NE Ohio, including Cleveland, Akron, Canton, Medina, Parma and surrounding areas.  For more details, please call a representative at 330-745-4545.