Ohio Mobile Gaming has been serving the greater Canton area for over 5 years.   Because we still maintain the trade names “Cleveland Bounce” and “Akron Bounce”, some don’t realize that we serve a much wider area.  Since day one, when we were ONLY known as Akron Bounce, we have served most of Stark county including Canton, North Canton, and Jackson.

Canton is actually the 8th largest city in Ohio.  As such, we’ve done hundreds of events in the greater Canton area (Stark county).  If you’re in the Canton area and are looking to pick up one of our inflatables, we’re not that far away!  Our new location on Tallmadge Avenue means you can hop on 77 north and continue up Route 8 to the Tallmadge Ave exit.  It’s about 20 miles from the city limits of Canton to our door.

If you’d prefer to have your inflatable (or video game party truck) delivered, we can handle that too.  Our primary delivery range is cut off around 20 miles for inflatables and 30 miles for the gaming theaters.  If you’re a bit outside the 20 mile radius, we may still be able to accommodate you – but starting/ending times will have to be adjusted slightly.  Call a representative for details! 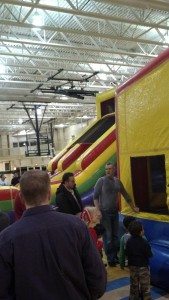